Bingag Ostrich is just along the way going to Tagbilaran {using the third path}. We often passed by this place but never stopped to look what’s inside until last August 29, 2011 which was declared by Malacañang as national holiday in celebration of National Heroes Day. I don’t expect much about this place because many locals already informed me that the place is small. But since, we are already here in Panglao, I convinced my husband that we visit it just the same – for the sake of my daughter who wants to see an ostrich.

There was no vehicle parked outside when we visited the place which made us thought that it was closed. But when I checked gate, there was an “Open” signage. So I greeted in a bit louder voice so the people inside might hear me. A staff opened the gate. She was the only personnel that time. She collected our entrance fees which if I am not mistaken was Php30 for adults and Php15 for kids. Then we started roaming around the place. 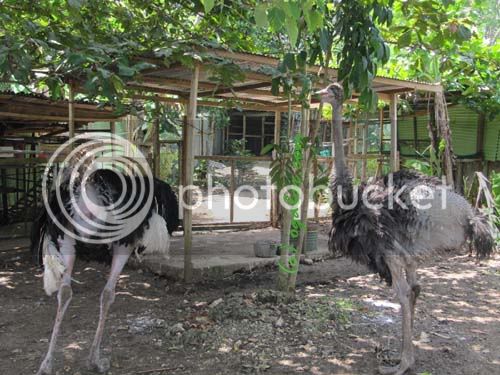 True to the testimony of the locals, the place is really small. It is so small that a visit can be done in just 20 minutes. I was even disappointed to see only 2 ostriches. We saw several empty ostrich egg shells so we inquired why the ostriches were only two if they produce eggs. According to the personnel, they don’t have an incubator so they could not make the egg hatch. For me, it was a waste. They should have several ostriches now if the owner invested on an incubator. But come to think of it, the incubator might probably too expensive and the owner could not afford it. Well, I hope some NGO’s will donate one for them.  Because when the two ostriches died {God forbid}, they have no more tourist attraction.

Aside from the pair of ostriches, there were also other animals like a small alligator, albino python, rabbits, ravens, wild cats, civet and more.

We continue our visit and in no time at all, we were done! Here are some of the photos we’ve taken.

When we first saw this wild cat, it was restless. But when we returned, it was already sleeping.

I forgot the name of this little creature.