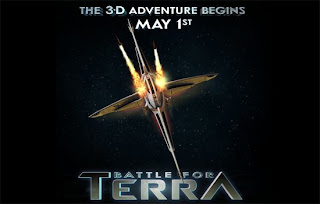 Synopsis
Mala (Evan Rachel Wood) is a precocious girl living on the beautiful planet Terra, a place where peace and tolerance are celebrated. However, the last inhabitants of Earth have exhausted the resources of their planet and are now searching for a new home. This Earthforce has discovered that the use of a Terraformer will make Terra habitable for humans but poisonous for Terrians. When the Earthlings embark on a hostile invasion of Terra, Mala’s father, Roven (Dennis Quaid), is kidnapped. Hoping to save her father, Mala captures and hides a crashed human pilot named Jim (Luke Wilson). While Mala nurses Jim back to health, the two forge a friendship and a plan that could save both the human race and the planet of Terra.