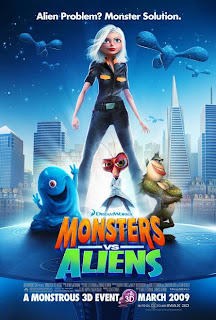 Synopsis
When California girl Susan Murphy is unwittingly clobbered by a meteor full of outer space gunk on her wedding day, she mysteriously grows to 49-feet-11-inches tall. Alerted to the threat of this new monster, the military jumps into action and Susan is captured and secreted away to a covert government compound. There, she is renamed Ginormica and placed in confinement with a ragtag group of other monsters: the brilliant but insect-headed Dr. Cockroach, Ph.D.; the macho half-ape, half-fish The Missing Link; the gelatinous and indestructible B.O.B.; and the 350-foot grub called Insectosaurus. Their confinement is cut short, however, when a mysterious alien robot lands on Earth and begins storming the country. In a moment of desperation, The President is persuaded by General W.R. Monger to enlist the motley crew of Monsters to combat the Alien Robot and save the world from imminent destruction.

Another movie to be much awaited for not only by kids but by those who were able to watch the previous monsters movies and still want more.