Since we got married and started sleeping on one bed, I discovered that my husband is a sleep-talker. He mumbled words during his sleeping time. Sometimes, I even tease him by asking him some questions and believe it or not, he can answer some of the questions correctly.

I am not also surprised when I discovered that my daughter do the same thing when she sleeps. There were times that they (my husband and daughter) seem talking to each other while they were sleeping. Thanks to staying up late at night that I really enjoyed these momments. Maybe next time I will record their conversation and let them hear it when they wake up.

Last night was totally a different thing. In the wee hours of the night, I was awaken by the sudden pain I felt on my flubby arms 😀 My husband was also awaken when I muttered pain. He immediately turned on the lights and checked my arms. The traces of his teeth were quite deep. He was really worried and kept on apologizing. He told me that he was dreaming that he was biting something and he didn’t realize that he was actually biting my arms. I almost got mad at him but the good thing was I came to my senses immediately. Anger would not make the pain subside nor the wounds healed. Instead of getting mad, I just teased him. I told him that maybe my arms are really big that he thought it was a pork 😀 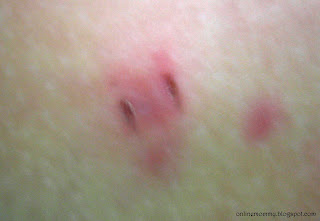 3 thoughts on “I Am In Love With A Vampire”