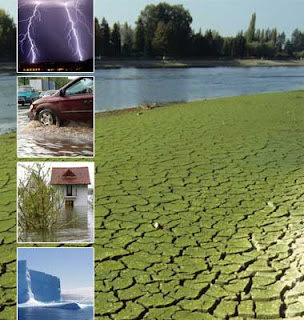 Did you notice that it was terribly warm for the last few days? Many people are aware of the term “Global Warming” but I am thinking how many of these people are taking it seriously.

Recently, my husband and I were able to watch a part of a tv show discussing about the Climate Change. The show presented many undeniable evidences that we are now experiencing the effects of global warming. The show was very informative but unfortunately, we were not able to watch it from the start. I tried to search it over the net but it was not also complete. Only the introduction was uploaded. How I wish the show will be repeated not only in one channel but on all channels during prime time to cater awareness to the majority of the Filipinos.
Global Warming has a domino effect. The obvious effect of global warming is the rise in temperature. The rise in temperature is not onlyhappening in the Philippines, but all-over the world. This rise in temperature causes the melting of the polar ice which is the cause of the rise in the sea-level. The rise in sea-level means more lands will be occupied by the water. And this is one reason why there is flood in some areas even without rain. Not only this, the rise in sea-level will also penetrate the fresh bodies of water where we get our drinking water.
The worst part is that Philippines is an archipelago, we are surrounded with bodies of water. This means that we will be more affected and we will be the first to feel the effects. We will also be the least to be able to adapt to the change because majority of the citizens are poor.

There are many more negative effects of global warming. The rise in sea-level is jus one. If you want to read more on this topic you can check http://www.epa.gov/climatechange/index.html. There are simple things we can do to help control the continuous rise in temperature. We need to act now, especially, us parents, because we have kids to protect and raise. We can no longer cure this environment disease but we can at least help not to aggravate the current condition of our atmosphere.

The Water Supply Shortage Is Getting Worse