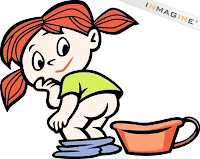 Ska’s potty training is still on going but with a big improvement. She no longer use diaper during day time for weeks now (big savings for me :)), except when we go out. There are still accidents but not as often as before. Before she would only say wee wee after she’d pee on the floor but now there are times that she would already call our attention if she need to pee, just like today. She approached me while I was cooking for our lunch because she needed to pee. Then, while we were eating, she approached our helper, because she wanted to poo. And surprisingly, she poo without any struggle. She usually cried when she wants to poo because she does not want to do it on the toilet bowl nor on her potty. I don’t know the reason but she seems afraid of the bowl and the potty. Maybe because she is always constipated since we changed her milk.

I almost surrendered with this potty – training. We tried several approach to help her feel more comfortable when laboring(that is how we call it when she is defecating. As if she is delivering a child, lol!) The first approach I tried was I allowed her to sit on her potty with her undies and diaper. She would only sit for a few second then she would just play with her potty. I also tried to carry her on the sitting position while I was sitting on the cover of the bowl and place the potty on the floor, but no success! She would struggle with me for me to put her down. We would give her some toy or play with some bubbles to pacify her. But this approach came to an end. It came to a point that even we gave her some toys, she would continue with the struggle. I was already thinking that she’s not yet ready for the training. For a while, I allowed her to do it by her own.

For the pee session, we usually bring her to the comfort room, few minutes after she woke up from her nap, after she drunk her milk or water or after 30 minutes to 1 hour after her last pee. We applauded her whenever she made it to the CR. And since we were doing this consistently, she got the idea that she is being applauded whenever she made it to the CR. Now, she’s the one initiating the applause right after she peed.

Since I noticed that she wants to do the defecating standing, I tried to let her stand on the toilet seat facing me or the anyone who is holding her. This position is effective for her. Since we tried this position, she would not hesitate to approach us when she need to poo and the struggle is eliminated.

Next step is to train her sit on the toilet seat. It is along process but I am confident that she will be able to make it.